If you follow me on social media you would’ve seen that in October 2017 I found out I got a ballot place for the 2018 London Marathon! Now let me take you on the journey of how this exactly happened. At the start of the year (2017), on a total quarter life crisis type whim, I thought it would be a great idea to enter the ballot for the London Marathon because like a gajillion people apply, and try and try to get a place for years and don’t. There was NO way I would get a place. Right?. Wrong. SO fast forward to October and the day people found out if they got a ballot. I was at work and had seen on Twitter that some people had received the results magazine. Basically you receive a magazine that either says ‘you’re in’ or ‘you’re not’, kinda thing. However I was at work and the post hadn’t been yet and I was totally impatient so logged onto my online account to see if there were any kind of sneaky hints to see if you’d got in. I logged in and saw that i’d been given a bib number, and according to Twitter at the time this meant I had a place. However I didn’t get excited/MAJORLY freak out until I got that confirmation. And lo and behold I went home on my lunch break and a ‘you got in’ magazine was waiting for me. GREAT. People try for decades to get a place and little old Sophie who’s never run before and used to try and get out of school cross country because of bad asthma is going to run 26.2 miles. 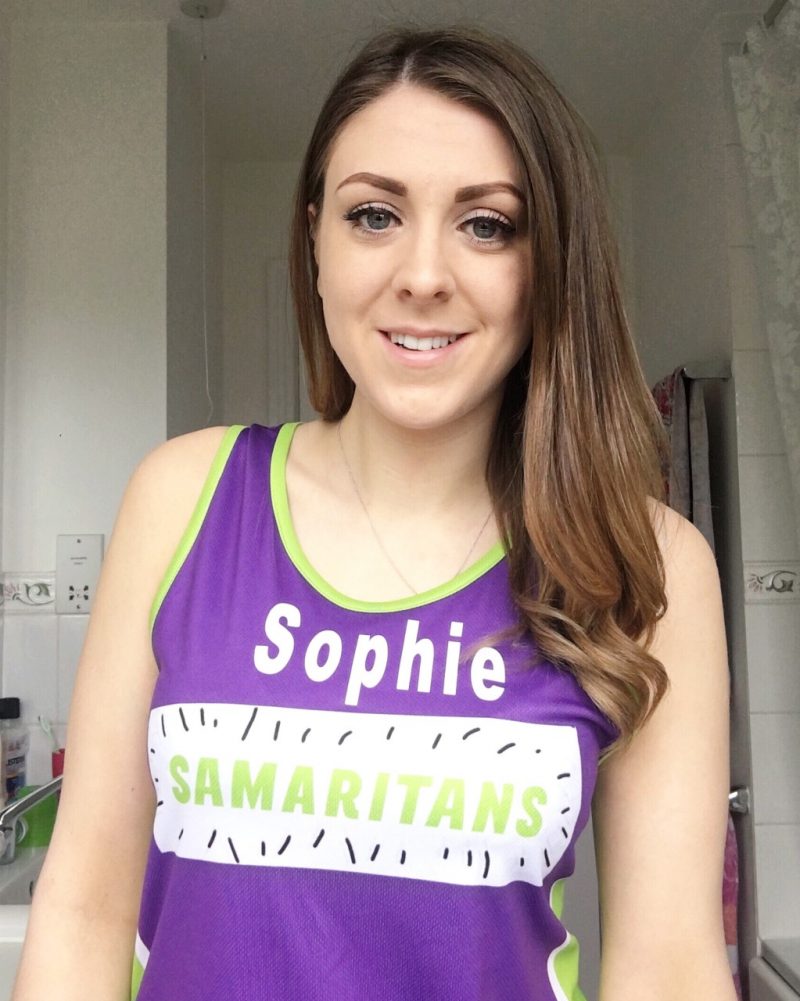 A lot of people said I should defer, but I thought you know what – i’m going to grab this opportunity by the horns and get out there and smash this. Carpe Diem and all that.  I thought that if I deferred and put it off for another year, i’d never get round to doing it. So I accepted my place and signed up with my first choice charity that I wanted to run for. Samaritans. I downloaded Couch to 5K and set out on my first ever run (walk with mild 1 min jogs) that very evening after work.

It was a great app for the first 2/3 runs that I did but I found the progress slow and I didn’t need many of the walking breaks it suggested. So I ditched the app and made my own challenges. Starting by running 10 minutes with no stops, building up by 5 minutes each week until I started to manage 5k’s (3.11 miles) and then 5 milers. I’ve done a lot of research into training plans and decided to follow and use both the Bupa Beginners Training Plan and the Virgin Money First-Time Finisher schedule, using both to create a rough guide of what to achieve and reach each week. Both of these plans are 16 week plans and so far have been amazing at getting my miles up but also strengthening my standard weekday runs. I’ve now managed to amp up

Things I’ve learnt since I’ve started running
On the whole I’ve learnt mostly positive things but there will always be a few people who can’t wait to dull your sparkle. And that’s something that in a weird little way spurs me on that little bit more. Even though i’m a novice to running and have only been training/running for 5 months there will always be those people who have never run, but love to tell you what distances you should be running and how often. This in particular has been my biggest frustration. I’m running the marathon as a total newbie to running. I started running the first week of October – just mastering a good 3-5 mile run. In January I then started a 16 week plan, of which I had extensively researched and asked friends who run about. I’m using 2 plans combined to make sure I’m reaching my full potential and you know what it’s working for me! So if you’re reading this and feeling the same, you listen to your body, you do your own research, and you run for you.
My experience of training for the London Marathon so far has been SO positive. The support i’ve had from my colleagues, friends and family, as well as totally random unknown people on the internet has been overwhelming. I’ve also surprised myself so much. Giving up alcohol and nights out so that I can be fresh for my long weekend runs has certainly been a novelty. I’ve also surprised myself so much that I thought what the heck and signed up to do Reading Hal Marathon because hey whats an extra race? (and also because race day practice is important!)

If you have any marathon tips then please send them my way. I have also got a post on my non running London Marathon tips.