Following on from my introductory post (here) about LighterLife Fast, I thought I would update you all after my first 4 weeks of the 5:2 intermittent fasting diet. 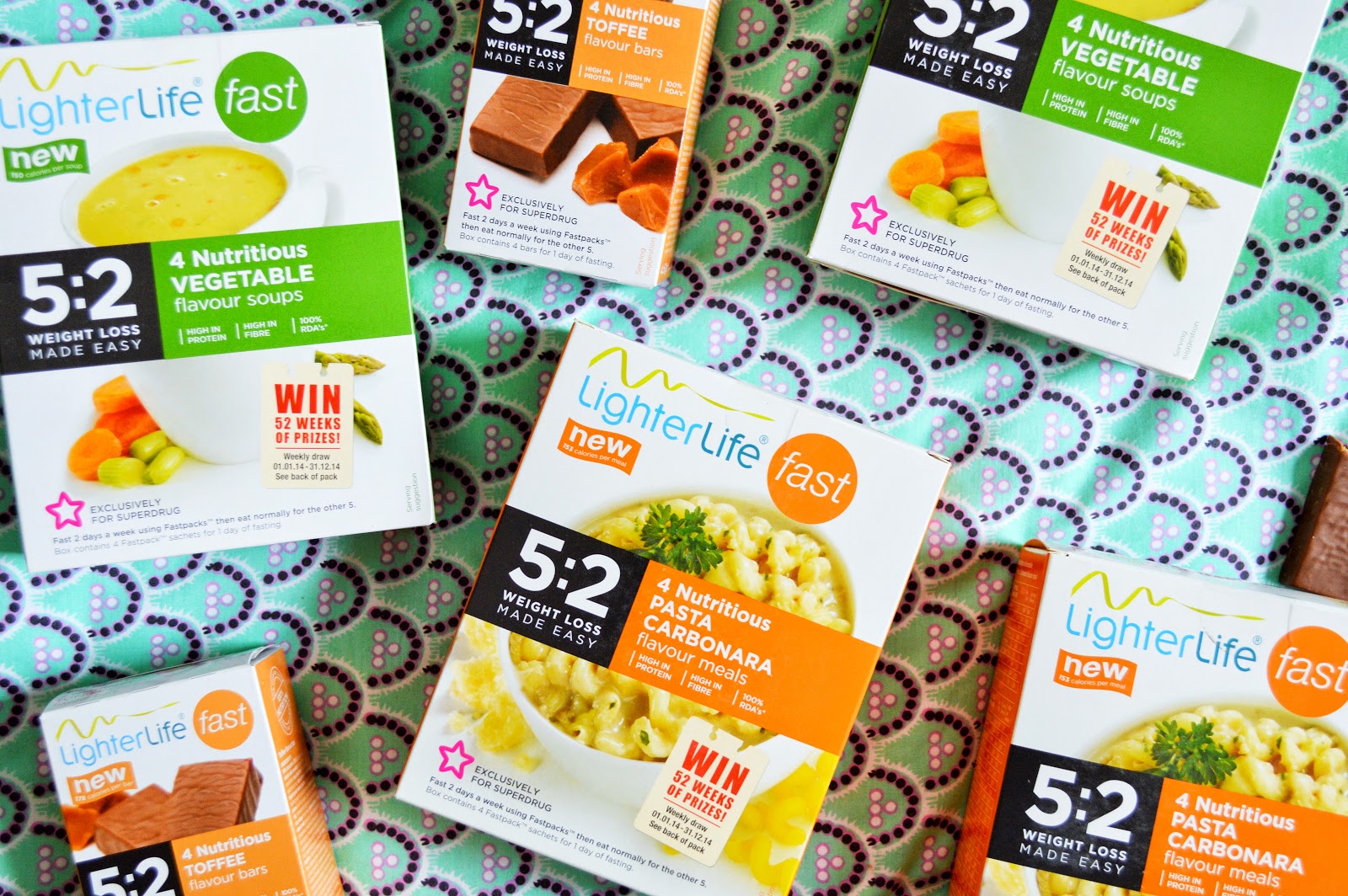 Week 1 – Monday & Sunday
I was really excited to start the lighterlife fast, and started my first fast day with a Toffee Bar. At first I wasn’t that keen on the bar, however after having one on the next day and during my second week they grew on me. The Toffee Bar’s have a really great fudgey texture, with a chocolate coating and they feel like you’re treating yourself to something really naughty, when in fact you’re not! I also found that chopping up the bar into little pieces and freezing it made a really great snack, and made the bar last a lot longer! The bars were also super filling, even better! During my first week I also tried the Vegetable Soup and Pasta Carbonara. Unfortunately the Vegetable Soup gave me a minor allergic reaction, (I suspect it was the chicory root extract ingredient) and so that wasn’t very good. However I was pleasantly surprised with the Pasta Carbonara. You would think, ew, pasta in a sachet? However I was surprised that there were actual pieces of pasta, and with a little extra pepper and a touch of mixed herbs, the dish was totally fine. It looks like a teeny tiny portion, but it was surprisingly really filling!

I was a bit naughty and added in some extra spinach to the pasta carbonara and I also ate a small tin of sweetcorn (not that naughty- but also not included in the plan!).

Week 2 – Wednesday and Thursday
After a few emails with a lady at LighterLife, she sent me some of the Vanilla Shakes to replace the Vegetable Soups and I was super impressed. I used my smoothie maker to blend up my shake with a few ice cubes and cold water. It tasted really sweet and it was very easy to drink. The vanilla shake really reminded me of the Vanilla Slimfast shakes, and they actually contain milk, and the Lighterlife one doesn’t, which is even better! I carried on with the Pasta Carbonara’s and bars.

I was also a little bit naughty on the Wednesday and I had half a roasted red pepper stuffed with 40g of Quinoa.

Week 3 – Tuesday and Wednesday
This was the week I discovered hot shakes. I was craving a hot chocolate, but had no hot chocolate powder and it’s not allowed on my fast day, so I improvised with my vanilla shakes! I boiled my kettle, let it cool down a little, added the sachet and some hot water to a big mug, and then hand blended. I was SO surprised at the result. The drink was delicious, and something I would just reach for when I wanted a sweet hot treat! I also found that adding a sprinkling of cinnamon to the top of the hot vanilla shake made it taste extra nice!

Week 4 – Monday and Friday
I carried on with my hot vanilla shakes, the pasta carbonaras and bars and this is the week where I think it got easier. I also started to notice on non fast days that I was less hungry and even found that I could stop eating a bar of chocolate when I had had enough, rather than polishing it off. Something small, but something I was also chuffed with!

When I talk about my losses (I hope..) I will only be mentioning the inches lost as I don’t feel comfortable talking about my initial measurements/weight.

Measurements at the end of month 1


Whilst these losses are small, they are still losses and I don’t have any access to scales but I would imagine i’ve lost around 3 pounds. Overall during my first month I found that I preferred to fast during the week, opposed to weekends, and enjoyed heating up my shakes during this winter weather! Next month I look forward to trying some more LighterLife Fast products and hopefully some more losses!

You can buy LighterLife Fast products exclusively at Superdrug

*In collaboration with LighterLife Fast.