Anyone who knows me will know that I love food. And when I’m stressed I love to turn to all the bad foods. Being at university with the binge drinking and uni stress has led to me gaining a fair bit of weight since I started uni 1 year and a half ago. I know yo-yo dieting is not the way forward, and that lifestyle changes are also needed, but I felt like I needed something to kickstart the weight loss, to make me feel positive and to get the ball rolling. 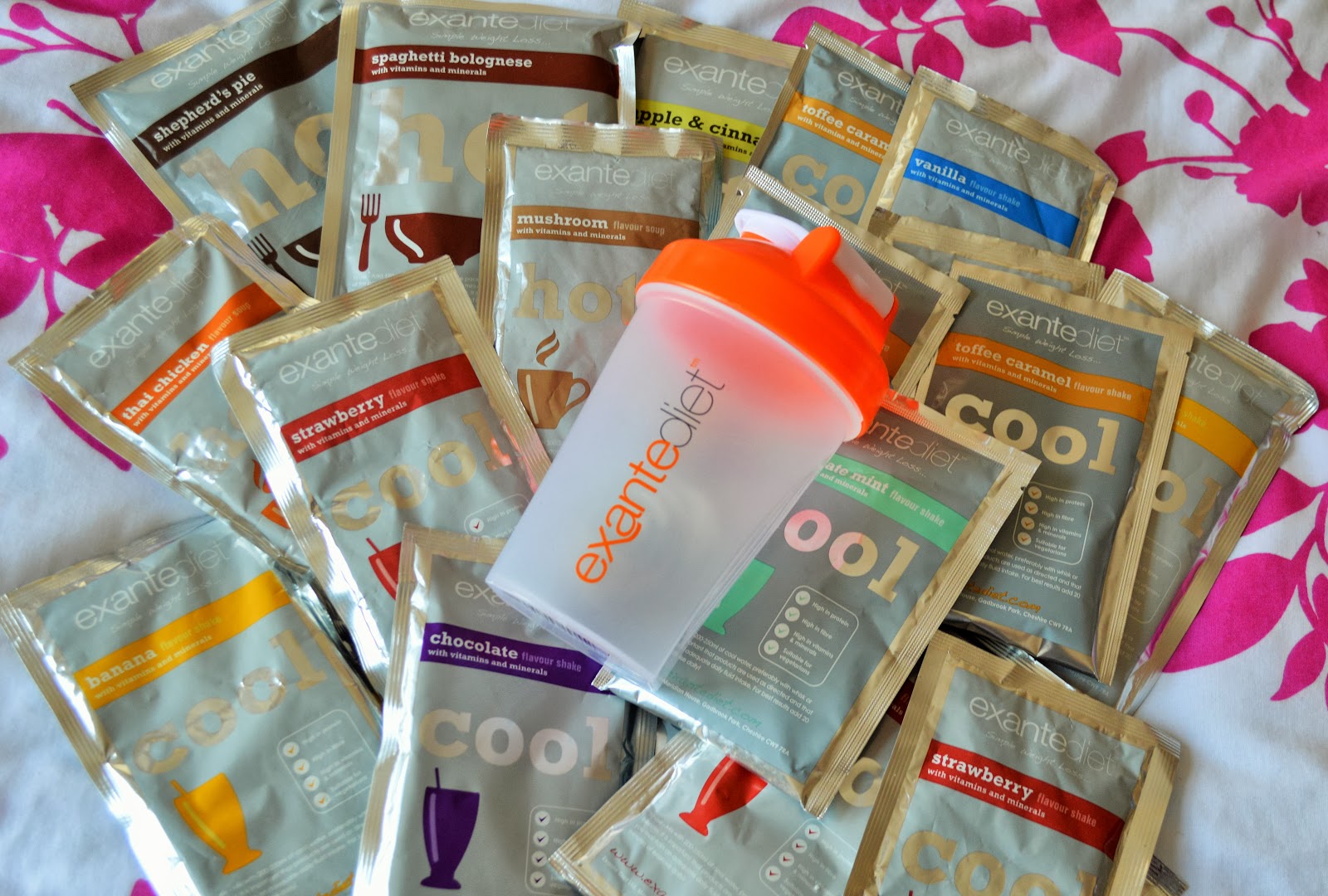 When I was offered the chance to try out the Exante diet for a week, I jumped at the chance! The Exante diet is the UK’s lowest price total meal replacement plan, offering a range of meal replacement based diet programmes, utilising soups, shakes, bars, porridge and ready meals. The products are high in protein and fibre, with 3 exante products in a day giving you 100% of the RDS for vitamins and minerals. As this is a very low calorie diet (VLCD), you body goes into ketosis where the body uses fat stores to produce energy, this results in rapid weight loss and Exante say you can expect on average a loss of 1 stone a month. 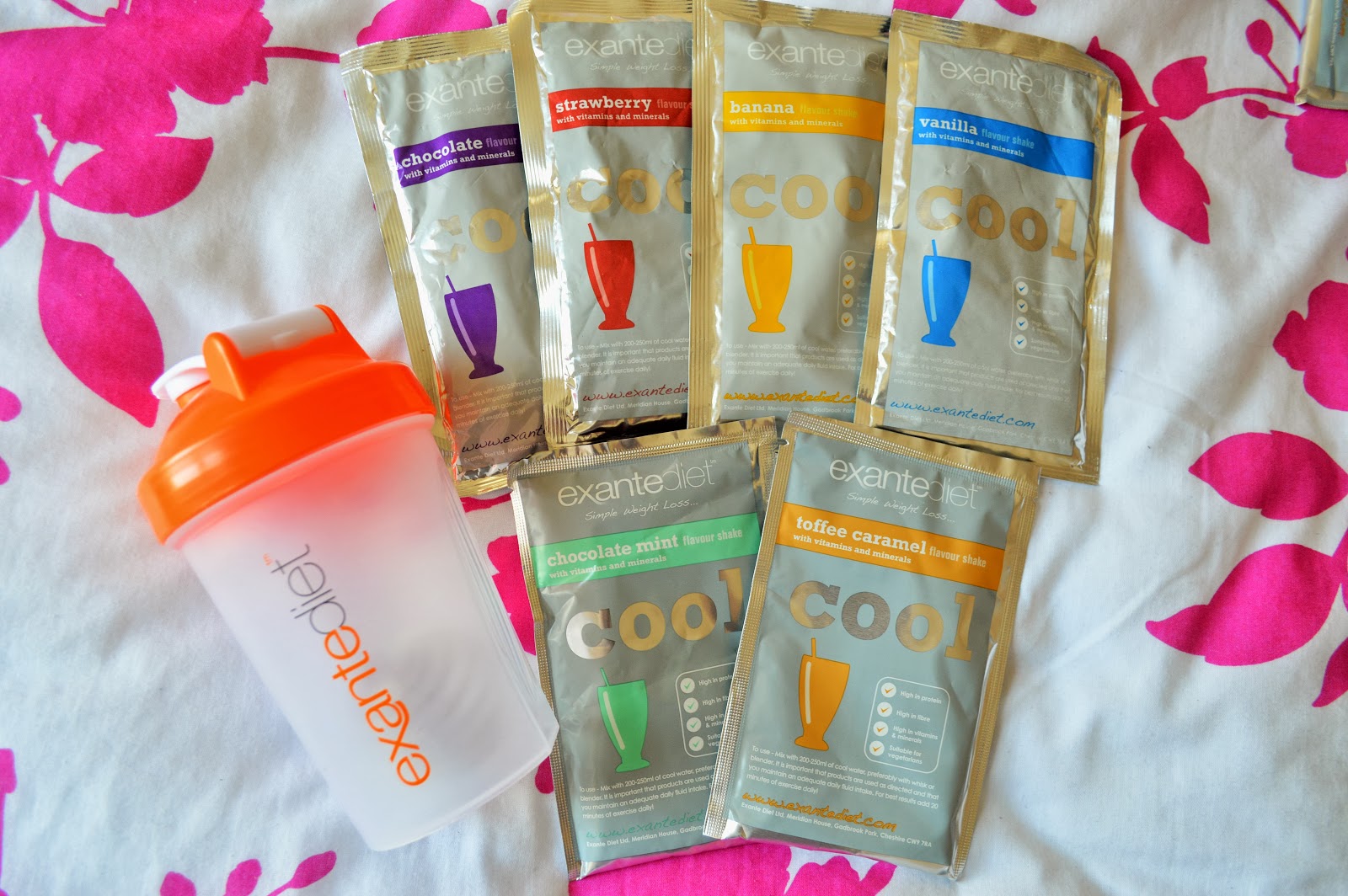 I was sent predominantly shakes, with a few ready meals, soups and porridge. I was very impressed with the selection of flavours of the shakes, as I was sent vanilla, chocolate strawberry, banana, toffee caramel and mint choc chip, yummy! The shakes were very easy to make, I simply just followed the instructions, adding 200-250ml of cold water to my shaker and mixing, I found adding 200ml was better, with a handful of ice cubes too. It is recommended to use a blender, but a hand held blender did the job. The shakes worked out at 201-206 calories a shake. My favourite flavour was the chocolate, and the strawberry was surprisingly creamy and tasted a bit like a McDonalds strawberry milkshake, which was okay!

I was sent the spaghetti bolognese and shepherds pie ready meals, and I have to say that when I saw the sachet of the mix I was not excited to try them, the spag bol one was surprisingly enjoyable and was a pleasant change from the shakes! However the Shepherds Pie was not for me, it was a sort of mousse consistency and I couldn’t get used to the flavour! These also worked out at between 201-202 calories

I was also sent some soups to try. Sadly I am allergic to chicken, so the Thai Chicken was given to my housemate. However I was really impressed with the mushroom soup and it seemed like an authentic mushroom soup!

I was also sent a porridge to try, the apple and cinnamon flavour. As I was cooking it I was initially excited as it smelt delicious, however when it was done I was not too impressed. The flavours were nice, I just couldn’t get over the floury after taste and it was too gloopy/runny for me to enjoy, although I did manage to finish it!

With all of these meal replacements, it is also encouraged you do 20 minutes of exercise daily and that you consume between 2-4 litres of water a day. My uni is a 20 minute walk there and back, and so that covered the minimum exercise quota for me.

I started the Exante diet on Sunday 16th March and finished 8 days later in that time I lost 3lbs. At first I tried to do 3 of the replacement meals a day but found I was just a bit too hungry still, so I had a meal replacement (shake) for breakfast and lunch, and then for dinner made myself a small, under 400cal dinner, with some salad on the side! I feel like this diet was a good kickstarter for me to change my bad eating ways and to eat more healthy, however a week was long enough for me!

Have any of you tried any VLC diets, did they work, what did you try?